This story first appeared on DNA Online on 18 March 2015

The Islamic State’s destruction of an ancient heritage site in Iraq earlier in March this year drew much worldwide outrage. People in India too, expressed their shock and outrage at the incident, but it looks like most prefer to turn a blind eye when it concerns the despicable condition of heritage sites closer home.

As one travels towards Mumbai’s western Nalasopara from the east, the transition is dramatic. While the east has already been subject to massive construction with ugly two-storied buildings being built, the west is pristine, akin to Goa with small roads, pleasant trees and single houses being the centre of attraction. However, it will not take forever for the east to eat into the west, which would mean the final nail in the coffin for Nalasopara’s rich heritage.

As per historians and experts in Buddhist studies, Nalasopara, earlier known as Shurparaka, with a history of more than 2,000 years, was a buzzing trade centre with routes to China, Japan, Sri Lanka and many more countries. Some Roman traders also mention Shurparaka as a centre.

The Stupa in Nalasopara (earlier known as Buddha Vihar), was supposedly inaugurated by Buddha himself and set up by a trader who went on to became a monk inspired by him. It is believed that Ashoka transformed it into a Stupa later on. The legend, though contentious, has it that this was the place from where Ashoka’s son Mahendra and daughter Sanghamitra embarked on the journey to Sri Lanka to spread the faith. Shurparaka’s reference can be found in literature dating back to the third century BC.

While the Stupa has been looked after, Nalasopara’s historical significance is nowhere to be seen. “From Vasai to Agashi, the entire belt has a deluge of sculptural fragments. But I do not see any documentation,” saya Suraj Pandit, Head of Department, Ancient Indian Culture at Sathaye College. “Unfortunately, nobody understands the grasp of the belt,” he says. The lake in Gaas village of Nalasopara is surrounded by sculptures which were found in the lake while cleaning it up. Further, pottery from the Satavahana period has been found in neighbouring farms, Pandit adds.

The archaeologically rich Nalasopara is perceived as a Buddhist site, but Pandit says its significance is multicultural. “Jain literature mentions Shurparaka as a pilgrimage centre,” he says. One of the most beautiful sculptures of Brahma is also situated here. The Virar west area has come under a lot of construction lately, with parks and residential complexes coming up. “The structural remains of the Portuguese period can be found here and they also had a shipbuilding factory here,” Pandit says. But though Nalasopara has the unique distinction of being an important archaeological, social, religious and economic site, it is now confronted with a cloud of fatality.

With Mumbai’s infrastructure needs swelling ominously by the day, one can understand that preserving everything at the exact spot is next to impossible. “Countries in the world conduct an archaeological survey before developing an area. This area certainly deserves one,” says Pandit. “We had proposed a museum to the Vasai-Virar Corporation, where the documentation of this opulent culture would enlighten visitors. It could have been a tourist spot”.

This ignorant attitude can be observed across the city with ancient Buddhist caves looking like a toad under a harrow. As far as Jogeshwari and Mahakali caves are concerned, one can be rest assured of the fact that it is not going to attract many visitors unless the stench of urine becomes fashionable. At the Mahakali caves, the stench merely welcomes you at the entrance, while at Jogeshwari, it accompanies you throughout like the pug in Vodafone’s advertisement. 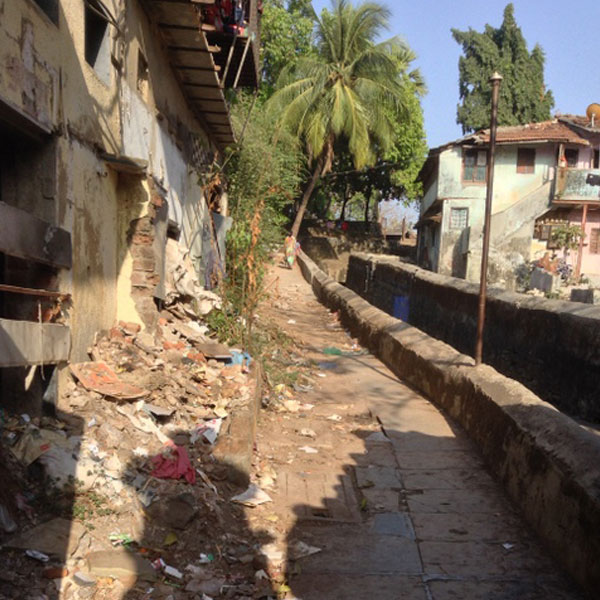 The site near the Jogeshwari Caves

The Jogeshwari caves, a sixth century monument, are believed to be the place where the Pandavas took refuge during their exile. Experts believe that the group of artisans who worked on the Elephanta caves also worked here, citing the resemblance in artisanship between the two. These caves, eclipsed by the presence of shanties around it, lie below the ground level, with steps leading to a rectangular doorway opening into a small foyer. As one enters into the dark spacious square cave, the Pujari sternly orders you to remove your footware, but the filthy earth, for some reason, escapes his eyesight. An entrance towards the right leads to small cells across the yard, where monks and priests supposedly inhabited. But now, it is used as toilets by settlers around the cave. As one walks further, there is another cave, through which the upward steps leads one out at the far end, where shanties resume again. Water seeps constantly into the walls of the cave and the stench of a gutter permeates as the Archaeological Survey India (ASI) warning board stands there helplessly.

The Mahakali caves at Andheri are relatively better. As mentioned earlier, the filth and stench leaves one at the entrance, leading into a fairly well maintained lawn. However, the lack of information has reduced it to a mere lawn. These Buddhist caves, also known as Kondivite, are believed to have been carved between the first century BC and the 6th century AD. The construction of its Chaitya wall is similar to Emperor Ashoka’s Sudama cave in Bihar, and the cave has a Stupa and a curved dome. A brief history is carved on a stone near the entrance, which educates the visitor about the Chaitya cave having a “peculiar plan layout” and being “one of the oldest in group”. Apart from that, no other signboard finds place in the complex, thereby bringing out one’s telepathic skills while finding out the Chaitya cave in the company of 20 other caves and cells. 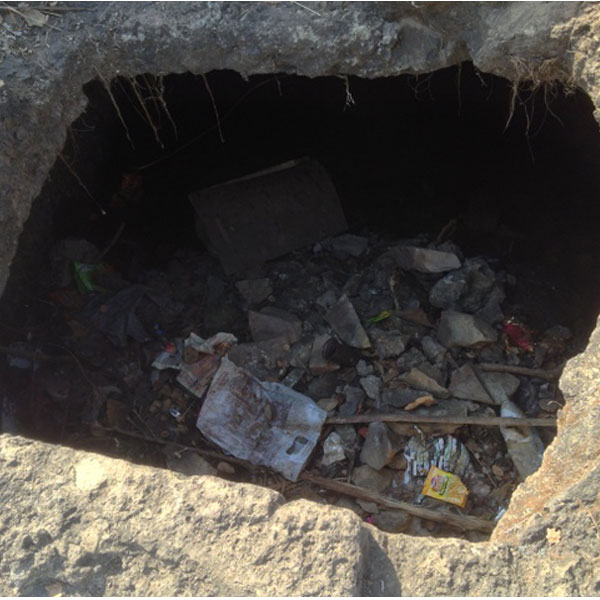 The site at the Mahakali caves is strewn with garbage

Four railway stations away, two ancient sites exist in Borivali – the Mandapeshwar and Kanheri caves. The Mandapeshwar caves are in a state that makes the Mahakali caves look like Vatican City. It is hard to figure out whether the caves are bordered by the rickshaw stand or vice versa. Located in the belly of the IC Church in Borivali, the 1600-year-old caves have been subject to political controversy with two religious groups, Buddhist and Hindus, claiming ownership. The open space that overlooks the caves is a convenient loo for slum dwellers residing opposite the site. When asked about a signboard with information about this structure, a police officer points towards a plank, which turns out to be an ASI warning board saying, in different languages, not to litter in the space. The consolation is that it is possible to talk about the place in present tense. The Magathane caves in Borivali could be demolished anytime with the State Government allotting the land to builders, deeming the sixth century AD site not worth preserving. About four miles south of Kanheri, Magathane was known for several archaeological relics. 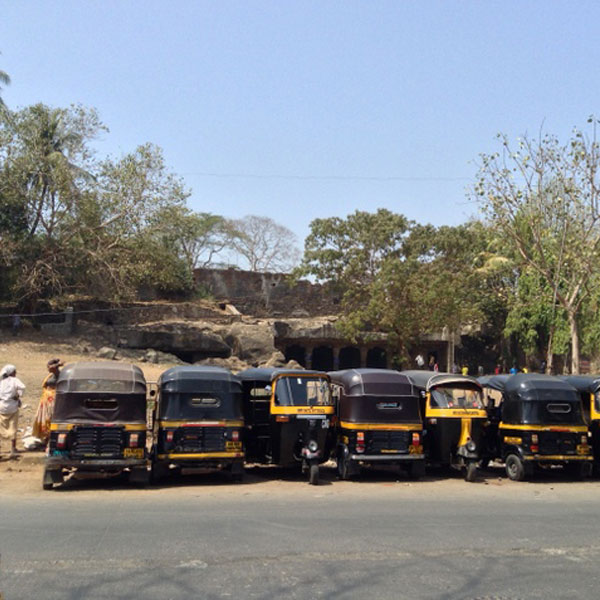 Kanheri, though, is a saving grace. Deep in the Sanjay Gandhi National Park (SGNP), away from residential area, it is the least troublesome in terms of encroachment and is a picnic spot for many. Tourists pour in on a hot Sunday afternoon, despite being charged about Rs 200, unlike other sites. “Two years back, it used to be inhabited by gamblers, drug-addicts and other shady characters,” says Vivek Redij, who lives in Borivali and comes to the SGNP for a morning walk regularly. On a recent visit though, the complex was neat and clean, with watchmen at regular intervals keeping an eye on any indisciplined visitors. Kanheri has the potential to be world heritage site, believes Pandit. “More than 120 caves have been discovered over there and many more treasures perhaps lie in wait,” he says. People go to spend a day away from the everyday buzz of the city, but very few know its historical significance. Kanheri was the biggest university in western India during its heyday-from the first century BC to the 11th century AD, historian Anita Rane-Kothare says, as quoted by a national daily. It is the single largest Buddhist site in the country.

Pandit feels the visitor circulation plan and visitor information centre at Kanheri is a necessity. “The site deserves a museum of its own,” he says. 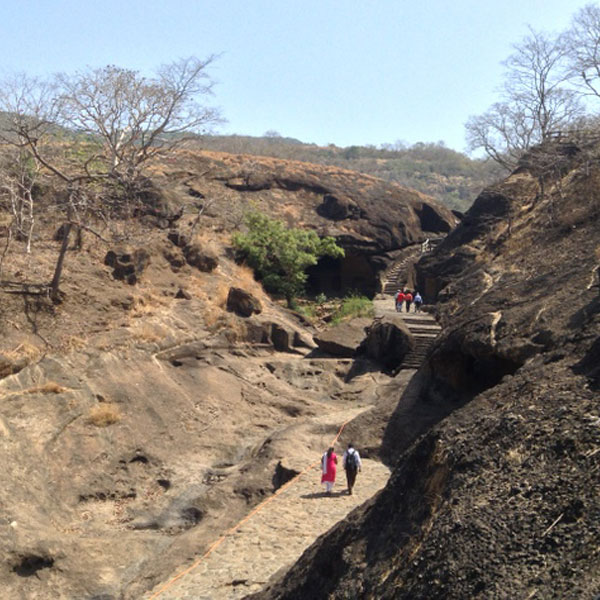 Apart from this, there is a serious paucity of local guides in Mumbai. “Whether at Kanheri or at Nalasopara, trained tourist guides can enhance the worth of a heritage site,” says Pandit. “It would also generate employment”.

Predictably, there seems no light at the end of this tunnel. “We desperately lack political will and local pressure,” Pandit laments. “In the West, where they preserve their culture on a priority basis, the common man feels equally strongly about it”.

Sachin Mendes, a socially active resident of Nalasopara, agrees completely. “Not many locals are aware about the history of this place,” he says. “And out of those who know, most do not understand its importance”.