When Janardan Patil gets home after cleaning up choked gutters in Mumbai, more filth awaits him. There’s not much respite after he returns from his job of manual scavenging.

Patil’s house in Panchsheel Nagar in the affluent South Bombay area provides a stark contrast. Past the British-styled architecture and five-star hotels that greet the eye, a diversion in Colaba leads to the harsh ground reality. Comprising of 155 staff quarters for the BMC-appointed sanitation workers, Panchsheel Nagar resembles a dumping ground with cement strewn all over and leaking pipes spilling out contaminated water.

The pungent odour grows stronger as one approaches the residential quarters. Immediately behind the building, a stream of filthy water pretending to join the drainage system runs parallel to the apartments. The stream, a few inches below the ground level, is escorted along with plastic bags, food waste and bottles on both sides. Patil’s backdoor, also attached to the kitchen, opens up to it. The cooking transpires with the repulsive stench hovering in the air. “The drainage gutter is not at all adequate considering the capacity of the building,” says Patil. “Time and again, the gushing water stinking of sewage overflows into the house.”

The residents of Panchsheel Nagar dread the monsoons. As the downpour sets in, the stream of filthy water overflows and swamps the ground floor. No matter how firmly the backdoor is locked, water manages to break into the one-room apartments. Food grains and utensils fail to escape its contact. “We cannot expect much hygiene while we are at work,” says Jayashree Lakhan, 58, a sweeper. “But do we not deserve a break from the muck where we live?”

The main door of the apartment is attached to the passage, which leads to three toilets shared by approximately 80 people living on the floor. The toilets have not been renovated for the last two decades, say residents, and its consequences are unbearable. Normally, a person carries a bucket full of water in the toilet, but here, a stick is equally important as the toilet is often choked. “Constant prodding and stabbing in the outlet helps drain out the waste while attending nature’s call,” says Jayashree, who got the job of a sweeper after her husband passed away in 1993. Many a time, even the stabbing proves futile and the human excreta overflows through the toilet. “Imagine starting your day like this,” she says. 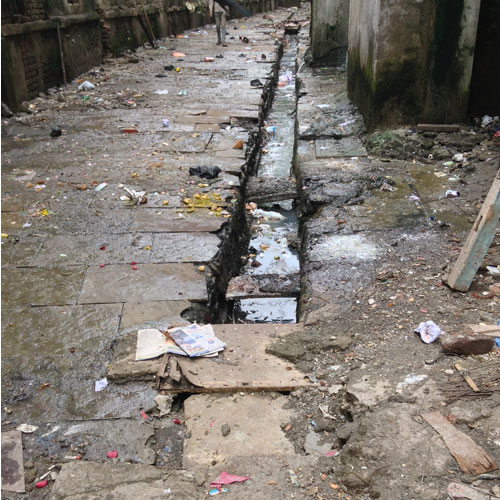 Ramesh Haralkar, a noted activist, believes the nature of the job has “made us forget that sanitation workers too are human beings.” As we make our way to the terrace of Panchsheel Nagar, the repugnant stench accompanies us throughout. The terrace, though, allows us to talk without holding our breaths. “The community that keeps the city’s drainage going is meted out such facilities,” says Haralkar, as the majestic Taj hotel, hardly a kilometre away, overlooks the colony.

There are about 35 such settlements in India’s booming financial capital. None in sound shape. “These colonies are like factories producing sanitation workers,” says Haralkar, who was himself one for almost two decades in the 70s and 80s. “The fear of losing the government house forces the next generation to carry the baton forward.”

However, Haralkar remains an exception. “The humiliation I faced during my working days made me determined to keep my three sons away from the profession,” he says, recollecting that the superiors never missed a chance to insult him. He has endured occasional physical attacks as well for demanding “humane treatment”. “I told my wife I do not mind sleeping on the road after we lose the government quarters but my sons would not do this job. I wanted the society to be respectful towards my kids.”

In order to circumvent his sons from his profession, Haralkar ensured they never drifted away from education. “It was the only way to break the shackles. I told them this house does not belong to us,” he remembers. “The moment they completed their education, I asked them to move out and find their own places.” His sons studied hard. One is now an MSW, second is a photographer and the third one is a journalist. When Haralkar was convinced his sons were fairly settled, he resigned from his job and shifted back to his native village in coastal Konkan. “They were exposed to a wider outlook. My heart fills with pride when I look at them today,” says Haralkar. “Other than fighting for their rights, I spread the importance of education among sanitation workers. The mindset of not prioritising education needs to be done away with. Workers believe education is a waste of time if eventually what one has to do is clean up the gutter.”

While Haralkar’s sons successfully changed their course, children of most sanitation workers have not been able to pursue education due to lack of exposure. Sewage cleanup may have become mechanised in some areas, but government figures suggest that 770,000 people in India either work as sewage cleaners or are supported by them. The BMC has more than 4000 manual scavengers at its disposal to clean up in excess of 50,000 manholes in the city.

In gutters about five feet deep, workers stand in chest-high sewage and use long wooden sticks to clear blocks. Manholes, on the other hand, are as deep as 40 feet where the worker has to descend into the pitch-dark sewer and physically siphon out the waste. Some manholes are big enough to house a rampaging truck.

Ramesh Chavan, 55, who has been a sewer cleaner for all his life, explains the abhorrent experience of entering a manhole. “Human excrement, filth are expected, but we have touched dead dogs, rats, sanitary napkins and many more repulsive things with our bare hands,” he says, as he gears up for another dive into a world beyond the imagination of a layman. He wraps a dirty handkerchief around his right palm, removes his t-shirt and waits for his colleagues to loosen up the lid. “It is impossible to descend without a few shots of cheap liquor. No worker can enter the manhole in normal senses.”

Labor activist Milind Ranade says the job still exists because of widespread apathy towards the lower-castes, which remain severely marginalised despite efforts to end caste-based discrimination. More than 95% of sewer workers are Dalits, according to the government’s figures. “Had an upper-caste [person] been entering the sewage system, we would have seen an uproar. But if a lower-caste worker dies, who cares?” says Ranade.

A law was passed in 2013 that made it illegal to employ such workers and directed rehabilitation with skill training and alternative jobs. Sounds fair. Except the enforcement has had little to do with the diktat. The law itself tacitly admits the difficulty in banning a job that employs lakhs of citizens who would lack alternative work. It specifies tests that should be conducted before workers enter manholes. “They earn around Rs 15,000 per month,” says Ranade. “With no education, no skills, they could permanently lose their livelihoods.”

One of its manhole tests, though, is simple: A candle is placed inside, and if oxygen levels are too low, the flame goes off. If there are toxic gases, the candle explodes. Assuming the situation is safe, workers must be fitted with harnesses before descending into manholes. However, Chavan says he has never seen the tests being carried out. “There is not even a first-aid kit available at the site,” he says. “Broken bottles lurking in the way often escape the eye in the absence of a torch, causing scars all over the body. The filthy water pierces into those cuts aggravating the injuries. I end up with an injection of Tetanus every six months.”

Implementation of labour laws is generally poor in India, says Mihir Desai, former director of the India Center for Human Rights and Law, a nonprofit organisation. Passing laws allows the Indian government to argue that it is in line with international standards, but authorities are less interested in ensuring that standards are enforced, he said.

A manual scavenger is exposed to toxic gases like methane, nitrogen and ammonia. Chavan says if he requests for masks, cap or gloves, the contractor ridicules and blackmails him. “They do not care if we live or die,” he says, in a defeated tone. “Their kids do not have to work in sewage water.”

Under the name of Narendra Modi’s widely appreciated initiative of Swachh Bharat, we saw many celebrities being clicked with a broom in their hands. Irrespective of whether the road actually needed cleaning, the photo-ops were grabbed with both hands. However, little appears to have happened for the workers who submerge themselves into a pit of shit and genuinely keep the Bharat Swachh.

When Tim Robbins crawled through the drainage system in the popular Hollywood film Shawshank Redemption, freedom embraced him on the other side. For our workers though, anything less than death is more than welcome.

The Tata Institute of Social Sciences, an educational and research organisation, found that an average of 20 sewer workers die each month in Mumbai from accidents, suffocation or exposure to toxic gases. There are cases where workers have been carried away by the gushing water. Moreover, 80% of the workers die before they turn 60 because of work-related health problems, the study found.

Chavan too, is enduring health issues. “I get breathless repeatedly,” he says. “I have shared my experiences with many officials, social workers and journalists right from the time I got this job. Now, I am nearing my retirement. Other than the authorities, nothing has changed.” On asked whether the expenses for an on-duty injury are covered, Chavan laughs. “Are you serious?” he asks. “BMC does not even care for a death. Getting hospital bills covered is a long shot.”

Chavan frequently learns about casualties on duty from his colleagues and news reports. The authorities term it a “sudden death”, shrug off responsibility and move on. Everybody knows the actual cause of the demise. But it is hardly discussed. Does it not send shivers down the spine of other workers? “Not really. We are used to it now,” he says and descends into the 30-feet deep manhole.